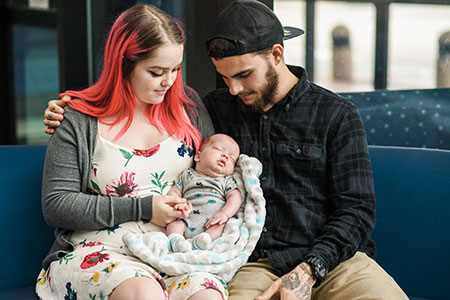 A quick online search of spina bifida — one of the most common birth defects affecting 1,500 to 2,000 American babies a year — generates phrases such as “not curable” and “damage to the spinal cord and nerves can’t be reversed.” But as Sarah Prowell and Sean Kirby watch their newborn, Uriah, kick his legs between naps, they are hopeful for his future.

At 18 weeks pregnant, Uriah’s parents learned that he had the debilitating neural tube defect. In its most severe form, babies with spina bifida are born with an opening in their backs that allows part of the spinal cord and nerves to protrude. Without medical intervention, Uriah faced a list of potentially serious disabilities, including paralysis, lifelong bladder issues and infections.

"We were both pretty distraught at first and worried about his life — the road ahead of him," Kirby said.

Kevin Magee, MD, a maternal fetal medicine specialist at Medical City Dallas, advised Uriah’s parents that his best option was to have spine surgery while still inside the womb. Prior to birth, early correction of these problems can increase the odds of a healthy baby. He recommended Timothy Crombleholme, MD, one of only a handful of surgeons nationwide qualified to perform open surgery on unborn babies.

Dr. Crombleholme and a team of multidisciplinary specialists successfully performed complex open fetal surgery on Uriah in June 2018 — the first time such a procedure was performed in North Texas.

“Performing open fetal surgery is a team effort among many exceptionally skilled clinical experts,” Dr. Crombleholme said. “Our comprehensive care team will help care for Uriah as he grows up, building on the fetal repair and supporting a greatly improved quality of life for him.”

"Uriah is doing so well; better than we thought he'd be," Sarah said. "I think he'll be very determined. I think he will impress us and everyone else, like he has so far."