Worst Year Ever for Ticks: What You Should Know 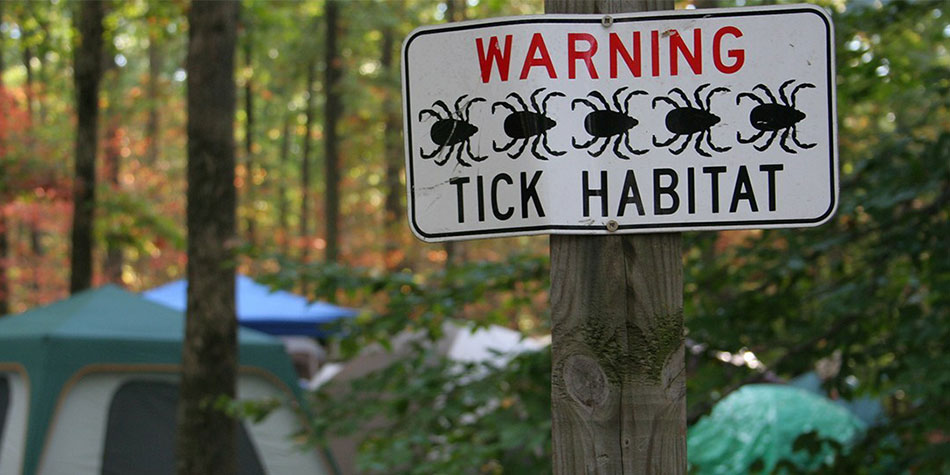 The bad news about ticks from last year just keeps getting worse. Data from the Centers for Disease Control shows a steady increase and spread of tick-borne illnesses and the government agency says the U.S. is not fully prepared for this growing health threat. In 2016, a report revealed that ticks capable of carrying Lyme disease (the most commonly reported vector-borne illness in the U.S.) could be found in almost half of U.S. counties.

The CDC's webpage on ticks has the most comprehensive, current information to keep you safe.

What you should know about ticks and tick-borne diseases.

There are four species of ticks common to North Texas and they can carry a surprisingly wide variety of bugs, including bacterial and parasitic diseases and viruses.

The chart below shows just how serious tick-borne diseases can be. Mild symptoms may be treatable at home with antibiotics, while severe infections can require hospitalization. Some tick-borne illnesses can leave you with long-term debilitating health effects and some can be fatal if untreated.

Lyme disease and Rocky Mountain spotted fever are reported most often in Texas, along with other rarer tick-borne diseases.

Be aware that it can take days to weeks for symptoms of a tick-borne illness to appear. At the first sign, get medical help immediately and be sure to tell the doctor when and in what area of the country you were in when you got the bite.

If you removed the tick yourself, you may want to save it for identification and lab testing in case symptoms occur. To do this, place the tick in a plastic storage bag and freeze it. If this isn't possible and the tick is still alive when it's removed, kill it by soaking it in rubbing alcohol and flushing it down the toilet to prevent it from biting anyone else.

Signs and symptoms of tick-borne diseases. 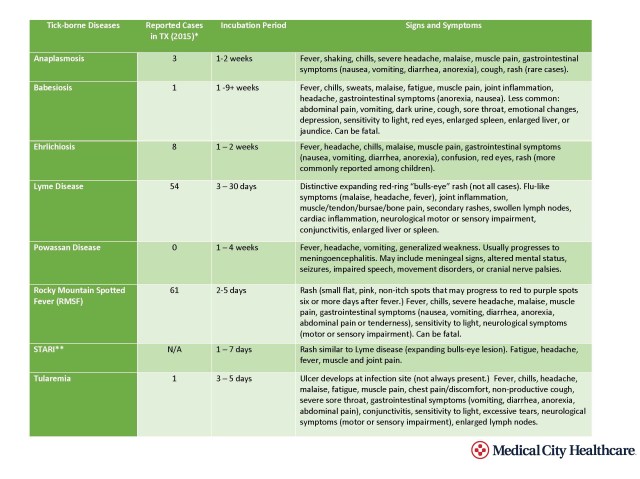 Stay away from folk remedies such as nail polish, petroleum jelly or heat, which can actually cause ticks to release more saliva or burrow deeper into the skin. Instead, remove ticks as soon as possible following these steps:

How to prevent tick bites.

If you walk your dog, bicycle, run, hike or camp in or near tall grass or woods – in Texas or on your travels anywhere in the U.S. this summer – take every precaution to prevent tick bites and to quickly remove ticks and treat bitten areas. Remember to protect yourself from stinging insects, too, as Texas is home to all five species that cause allergic reactions.

If someone in your family shows symptoms of a tick-borne disease or any allergic reaction to insect bites or stings, one of our many Medical City ER locations across North Texas has you covered. With average wait times posted online, if you do have an emergency, you can spend less time waiting and more time on the moments that matter most.

The post Worst Year Ever for Ticks: What You Should Know appeared first on LifeSigns.

When to go to the ER: 15 signs and symptoms

July 14, 2022
When a loved one is sick or injured, here are some signs and symptoms that warrant a trip to the ER.
Next Post
Back to blog home

How to Prevent and Treat Cyclospora Infection