Know When to Call 911 Instead of Driving to the ER 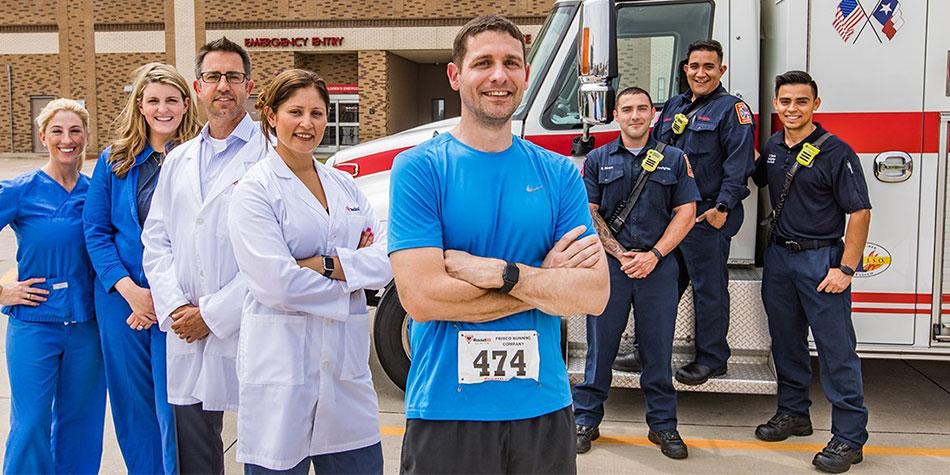 You know when to use virtual care (24/7 online treatment for a wide range of non-emergency medical conditions), urgent care (extended and weekend treatment for minor injuries and illness), and when to go to the ER (severe but not apparently life-threatening emergencies). But do you know when to call 911?

Making the right decision could save a life.

It happened to Philip Smith; a healthy, fit 39-year-old marathon runner from Frisco. After completing his morning run, he told his wife, Megan, that he didn't feel well. Uncharacteristically, he went upstairs to lie down, noting that the uncomfortable sensation in his chest was getting worse. When cold sweats, nausea and numbness in his hands followed, Megan called 911. Her call started a process that very likely saved Philip's life.

Turns out, Philip was having a massive heart attack, with 100% blockage of his left front artery—known as the widow maker. The moment Megan called 911, Frisco Fire Department first responders knew they were dealing with a chest pain victim. Once they determined Philip was having a heart attack, they transmitted his EKG to Medical City Frisco and called the hospital to give additional details. This alerted the cardiac cath lab staff and allowed them to be ready and waiting for Philip when he arrived in the ambulance.

"The sooner you call 911, the sooner EMS arrives and it starts the chain of care—the more likely you'll survive," said Marc Krock, MD, the interventional cardiologist who treated Philip. "This case is the perfect example of identifying the signs of a heart attack."

While it's not always obvious when an injury or illness is life-threatening, in general, if someone is experiencing new, unexplained or severe symptoms, those are clues that you might need to call 911.

For example, if you're having:

Other situations which may require a call to 911 include:

Why you should call 911 instead of driving to the ER.

Here's what you need to consider when deciding whether to jump in the car or call emergency services.

According to the CDC, calling 911:

Always call 911 if you think someone is having a life-threatening medical emergency.

For less severe accidents, injuries and illness, one of our many Medical City Healthcare emergency locations has you covered. With average wait times posted online, if you do have an emergency, you can spend less time waiting and more time on the moments that matter most.

The post Know When to Call 911 Instead of Driving to the ER appeared first on LifeSigns.

How to Avoid These 6 Hidden Summer Holiday Health...

May 23, 2019
The CDC says electric scooters are responsible for a surge in ER visits for fractures, dislocations and head trauma. Learn how to ride safely...
Next Post
Back to blog home

Do You Know What to Do in a Snakebite Emergency?

Know How to Combat Germs with Soap, Snot and Singing