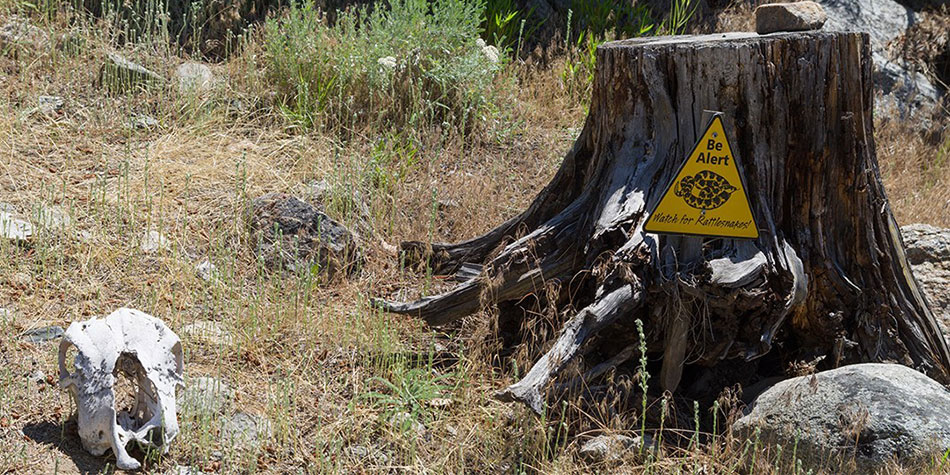 I could easily have been a statistic: Already this year in North Texas 25 people have reported being bitten by a snake. That's two more than at this same time last year and 13 more than in 2014. The weather is most likely responsible for the increase in snakes, with heavy rains last spring followed by a relatively mild summer and winter and now ... more rain.

As it is, I'm forever grateful to a "gentleman" rattlesnake I encountered once while collecting firewood in North Texas. I was in a mowed, wooded area between the office where I worked and a residential tract, happily filling a canvas bag with kindling on my lunch break. Head down, intent only on finding the next stick, I heard the ominous rattle and froze. Looking up, I saw it coiled impressively beneath a tree not 20 feet in front of me.

My heart nearly stopped; this was the biggest snake I'd seen outside a zoo and its message was clear. I set down the bag, backed away slowly, then turned and ran. Our building manager (who sternly informed me the area was a known rattler hangout) called a snake removal expert, but they didn't find it.

My heart still wobbles when I think about that day. I'm just so grateful I wasn't bitten. I wouldn't have known what to do. Would you? Whether you're on a family campout or chilling in the backyard, here's how to keep a snakebite from landing you in the emergency room and what to do if one does.

The ABCs of Not Getting Bit

Snakes are generally harmless to humans unless startled or cornered. Most bites happen when people accidentally step on or near one. Follow these ABCs to prevent snakebites:

DOs and DON'Ts of Surviving a Snakebite

Venomous snakebites require immediate medical attention, but how you react in the minutes or hours after getting bitten is crucial. Antivenin is generally most effective within the first 4 hours and usually ineffective after 8-10.

Trent Boyko, Emergency Medical Director of ER at Grand Prairie, gives advice about treating snakebites after treating a patient and sending him to Medical Center of Arlington for overnight observation.

The weather is most likely responsible for the increase in snakes, with heavy rains last spring followed by a relatively mild summer and winter and now ... more rain.

Most local snakes are harmless to humans and may even help control other pests, but you should learn to identify our 4 venomous vipers:

Reactions to venomous snakebites are typically immediate, painful and severe, but not always. According to the U.S. National Library of Medicine, coral snake bites can be painless at first, with major symptoms developing hours later.

Rattlesnake, cottonmouth and copperhead bites are instantly painful. Symptoms are immediate and may include:

I'm thankful that my rattlesnake encounter turned out to be nothing more than a scary and lasting lesson about staying alert to my surroundings. If yours goes beyond that, you'll be glad to know that most snakebite victims recover completely with proper medical care.

When the unexpected strikes, you'll find expert emergency care at one of our many Medical City ER locations across North Texas. With average wait times posted online, if you do have an emergency, you can spend less time waiting and more time on the moments that matter most.

The post Snakes in the Grass: Know How to Avoid and Treat Snakebites appeared first on LifeSigns.

Why you need to be holiday heart smart

When Things Heat Up in the Kitchen This Thanksgiving, Make Sure You Wear Protection