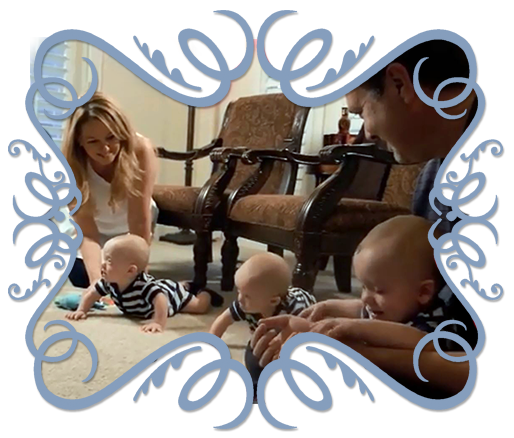 At an early prenatal appointment, Angela and Randy Sharp of Lewisville were surprised to hear three distinct heartbeats during their sonogram (also called an ultrasound).

"That was quite a nice surprise," said Angela.

But the news wasn't all good. Angela's doctor discovered that she had vasa previa, a rare but potentially severe condition. In vasa previa, some of the fetal umbilical cord blood vessels run too close to the internal opening of the cervix, inside of the membranes (amniotic sac) but outside of the umbilical cord and placenta. This puts those vessels at risk for rupturing when the membranes break.

"There was a chance of bleeding and losing all three babies," Randy said.

The Sharp's were fortunate to have found out about the condition early on — vasa previa often goes undetected. In undiagnosed cases, 56% of pregnancies result in a stillbirth. However, when a diagnosis is made, the survival rate rises to 97%.

The Sharp's knew what they had to do.

"We did the research, looking for a specific NICU level: Level III," Randy said. "There was a hospital a few miles closer to us, but they only had a Level II NICU. Knowing that we could have an emergency, we didn't want to take any chances. We went with the hospital that had the better facilities, which was Medical City Lewisville."

Though vasa previa is often undiagnosed, two signs that it may be present include:

Pregnant women who have either of these symptoms should seek medical attention immediately.

Risk factors for vasa previa include:

NICU levels and why they matter.

Even though Angela's due date was months away, the labor and delivery team got right to work.

"Medical City Lewisville is equipped to provide care down to gestational ages as low as 23 weeks, which is just a little over halfway through a pregnancy," said Deborah Cates, RN. "With the Sharp's babies, we did have some notice from their OB/GYN that they would be delivering with us. As soon as we got that information, we started making a plan."

At 30 weeks, Angela came to the hospital with some concerns.

"There were reasons to go ahead and move forward with her delivery," Nurse Cates said. "Our teams were in place and had everything in the NICU ready to take care of these three precious little baby boys."

Had the Sharps chosen to deliver at a hospital with a lower level of neonatal intensive care, their babies would have had to have been transferred to a Level III or higher. At Medical City Lewisville, Angela and her babies were able to remain in the same location.

Even parents-to-be who don't anticipate any problems with their pregnancy or delivery should consider the NICU level of their chosen hospital. It's just one of the things you should look at when choosing the best hospital to have your baby.

Angela spent her days in the NICU, holding her babies, changing their tiny diapers and learning how to care for them when they were released.

"From the doctors and the nurses to the food service, they provided excellent care," Angela said. "It was wonderful. It was a great experience."

"There's no doubt we'll be eternally grateful to the hospital and all the staff," Randy said.

We don't just deliver babies. We deliver dreams.Findthe perfect doctorfor you or your baby or visitMedical City Virtual Care24/7 from any computer or mobile device.

Diary of a First-Time Mom: How to Choose a Pediatrician

November 20, 2018
First-time mom Susan shares what she learned about choosing the right pediatrician for her family.
Next Post
Back to blog home

12 Tips to Get Ready for Back to School

VBAC: How one mom found the support she needed

Choosing the best OBGYN and hospital for you

Tips on Creating a Low-Tech Childhood

How to Protect Baby's Skin in Winter