Having Twins (or More)? Be Prepared for the Unexpected 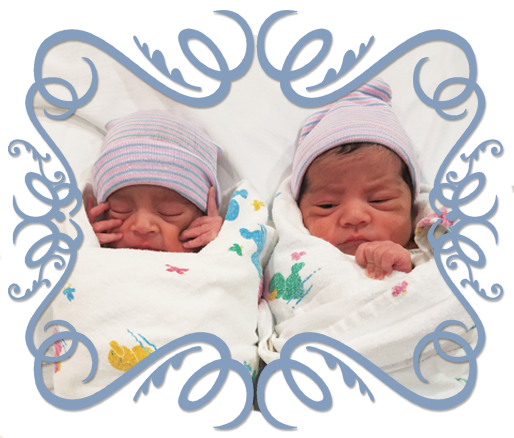 Having Twins (or More)? Be Prepared for the Unexpected.

Babies — even before they are born — have a mind of their own. Add multiples to the equation and you magnify the "anything can happen" quotient. Throw in a December or January due date and you can definitely expect the unexpected.

Cassandra knew she was carrying two babies and that they might come earlier than her January 20, 2017 due date. But she never imagined a scenario in which she would deliver her fraternal twin boys less than 30 minutes apart and yet on two different days as well as in two different years.

It's as much as a one in two million chance, some experts say.

"Jordan came at 11:46 and J'aiden came at 12:12; right after midnight," said Cassandra. "I really wasn't thinking about the timing at all. But now that they're here, it's kind of exciting. I ended one year with a baby and started a new year with another. It's something to remember."

Who doesn't love twins? Whether they're toddlers or teenagers, dressed identically or fiercely independent, there's something irresistible about them. We've all wished at one time or another that we either were a twin or had a set of them. But how much do you really know about them? Here are the facts.

Twins in the news.

Click on the links below for more stories on the New Year's Eve twins born at Medical City Arlington and around the country.

Five Ways to Socialize Your Little Ones for Free

I'm Pregnant! How Do I Tell the World?

Diary of a First-Time Mom: Moving From Loss to Baby Joy