Does the Latest Exercise Worry (Rhabdomyolysis) Have You Spinning?

A recent wave of articles based on a 2017 report published in the American Journal of Medicine (AJM) has exercisers — especially those who take indoor cycling classes — concerned that over-exercising will lead to muscle meltdown. Clinically, the condition known as rhabdomyolysis, or "rhabdo," occurs when muscle tissue begins to die, leaking a protein called myoglobin into the bloodstream. Small amounts of myoglobin can be filtered out by the kidneys, but the protein breaks down into substances that can damage kidney cells and too much will shut them down.

Exercise-induced rhabdo among weekend warriors is rare. In the past, it's been more often associated with soldiers, firefighters, college athletes such as the eight Texas Women's University volleyball players who were hospitalized with rhabdomyolysis in 2016 and others whose professions or training can be especially physically demanding. The AJM report is based on three spinners out of a study group of 46 who got rhabdo from indoor cycling; 42 of them became injured during their first class.

Rhabdo can be caused by a variety of issues that lead to muscle death or damage, including:

None of the articles suggest that you should stop doing high-intensity exercise, as it can provide a variety of health benefits. But you should learn to recognize the symptoms of rhabdo, because the earlier treatment is started, the better.

Here are symptoms of rhabdo to look for:

These symptoms can also be present:

If you think you or an exercise buddy might have rhabdo, call 911 or head straight to the nearest ER. Time is critical in preventing kidney failure.

Treatment for rhabdo can include: 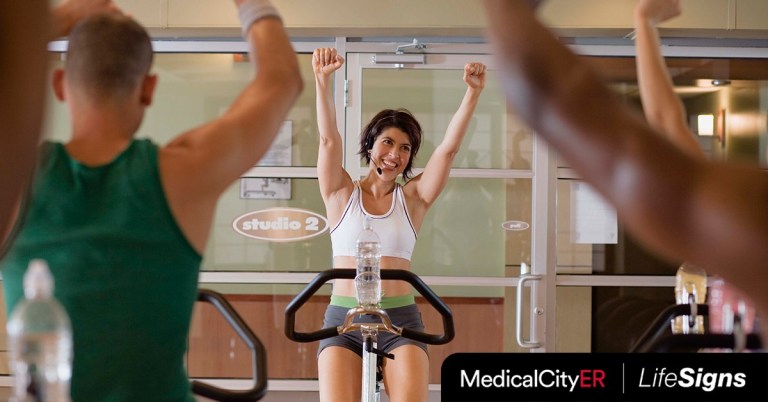 How to prevent rhabdomyolysis.

As the AJM report noted, exercise-induced rhabdo almost always affects people — even fit ones — trying an aggressive new activity for the first time and overdoing it. Here's how to make sure it doesn't happen to you.

If your latest exercise routine has you spinning out of control, look to one of our many Medical City ER locations across North Texas. With average wait times posted online, if you do have an emergency, you can spend less time waiting and more time on the moments that matter most.

The post Does the Latest Exercise Worry (Rhabdomyolysis) Have You Spinning? appeared first on LifeSigns.

Do You Need to Be Worried Your Kids Are Getting Too Much Caffeine?