MCKINNEY – Jeremy McDonald’s dreams of winning gold during the spring Special Olympics were dashed when he took a tumble running the 100-meters. But he found another winning team in the emergency room at Medical City McKinney.

The 19-year old Special Olympics athlete broke multiple bones in his arm during the fall and had to be brought via ambulance to Medical City McKinney’s emergency room. The injury required his nurse, Brenda Cannedy, RN, to immediately prep McDonald for X-rays and emergency surgery by cutting off his beloved Special Olympics t-shirt.

“Jeremy was proud to be participating in the games and he told me how he was a fast runner, but he was sad that his Special Olympics shirt was ruined because I had to cut it off,” Cannedy says.

“While it was a clean break, we had to place plates and screws in to hold the bones in normal alignment so that he will heal properly,” says Dr. Hubert. “Jeremy is a very upbeat young man and had a great attitude despite his injury.” 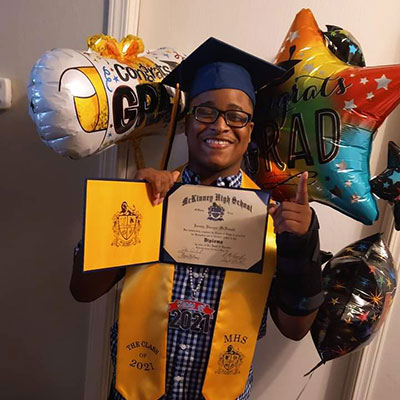 “At Medical City McKinney, we truly do care like family for our patients and each other,” Cannedy says. “I stopped by to check on him, and he was grinning ear to ear. He was telling everyone that would listen about his visit and his gifts. Finding a replacement t-shirt provided some additional healing medicine and brought us all joy.”

“Everyone was wonderful and took such great care of Jeremy. He connected with his nurses and physicians, and made friends with everyone during his hospital stay,” says Karen McDonald, Jeremy’s mom. “Jeremy loves all the new shirts. He is so excited that he wants to wear one of them every day.”

Just weeks after the fall, McDonald wears a brace on his arm and continues to heal. He graduated from McKinney High School in late May, and is looking forward to a summer of playing video games and hanging out with his family.

“It was a blessing to receive such great care from everyone at Medical City McKinney,” McDonald says. “Everyone was wonderful. They took great care of Jeremy.”