Birth may be as rare as one in a million

An Arlington family celebrated New Year’s Eve and New Year’s Day with the birth of their twin boys at Medical City Arlington. The fraternal twin brothers were born on different days and different years, an event that may be as rare as a one-in-a-million occurrence, according to some estimates.

Cassandra Martinez was due to deliver her third and fourth babies on Jan. 20, but they came early. 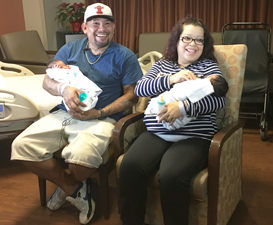 "I definitely was not expecting to spend the holiday in hospital, but I’m glad they're here and healthy," said Cassandra Martinez, the twins' mother. “Way better than the ball drop!”

Jordan Jeremy Sanchez was delivered by natural birth at 11:46 p.m. on Dec. 31, weighing 6 pounds and 3 ounces. His 5 pound, 4 ounce twin brother, J’aiden Michael Sanchez was born by c-section at 12:12 a.m. on New Year's Day, making him the first baby born at Medical City Arlington in 2017.

In addition to having different birthdays, the Sanchez twins are the third set of twins of this generation in their father's family.

Photos of the babies and their parents are available on Facebook.

Video of the babies and their parents are available on Vimeo.