McKinney – Danny Saxon, an aquatic engineer, was working on a client’s pool when his arms and hands began to tingle and he felt he might pass out. After calling his wife Morgan and alerting her to his symptoms, she texted him an image of a magnet on their kitchen refrigerator with heart attack warning signs.

Saxon arrived at Medical City McKinney’s emergency department and the medical team immediately started treating him for a heart attack. Within an hour of his arrival, he went into cardiac arrest. His heart stopped beating.

His doctors say Danny Saxon’s decision to come to the ER as soon as he started to experience symptoms likely saved his life.

These warning signs include:

“Danny’s heart monitor went off. He didn’t have a pulse. He was in cardiac arrest,” says Megan Peters, RN, the nurse caring for Saxon. “I hopped up on the edge of the bed so I could gain leverage and started chest compressions. I called for a crash cart, and we shocked his heart three times before he regained a heart rhythm and consciousness.”

Rushed to the cardiac catheterization lab, Ricardo Guerra, MD, a cardiologist on staff at Medical City McKinney, found Saxon’s right coronary artery was 100 percent blocked and was not receiving any blood flow. Medical City McKinney is accredited in Chest Pain by The Joint Commission. 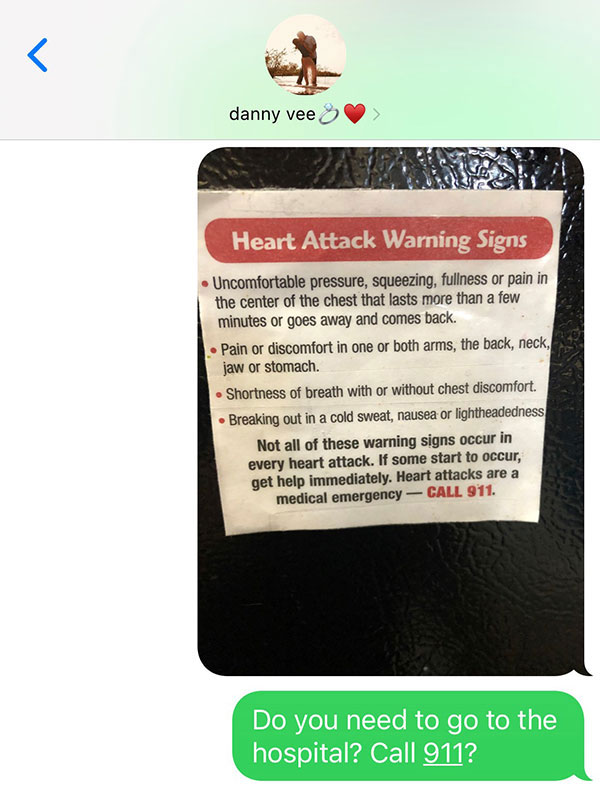 “We were able to reopen the vessel with a balloon and stented the artery to restore blood flow,” says Dr. Guerra. “Because he came in early, he was in the right place at the right time. If he had ignored his symptoms, he would have had a low chance of survival. Now, he can lead a completely normal life.”

“Before the heart attack, I was on two blood pressure medications that were not very effective,” says Danny. “I am now on a new medication and have stopped smoking, which will help prevent future heart attacks.”

Hospitalized for two nights, Saxon was discharged home on Valentine’s Day. A week later, the grateful father of five brought his wife and their three youngest sons by the emergency room to bring Megan Peters a bouquet of flowers.

“Megan is my angel. She kept me alive when I coded in the ER and came up to check on me in the hospital,” says Saxon. “Our kids were excited to meet the nurse who helped save their dad’s life.”

“It is so nice to see someone so grateful for what we do,” says Peters, who graduated from nursing school in May 2021. “I played a role in this person being alive and was brought to tears when his young kids thanked me for saving their dad.”