Six days after he was born, baby Acelin Castro Barreto almost died. Acelin's parents took him to the emergency room at Medical City Plano because they were concerned that “something wasn’t right.” The decision to make the 15-minute drive from their home in The Colony to Medical City Plano in October 2018 likely saved his life.

Today, Acelin is a healthy, 16-month-old toddler and a sepsis survivor. His outcome could have been different if expert medical attention had been delayed.

Sepsis, which kills 270,000 Americans annually, is the body’s overwhelming and life-threatening response to infection, which can lead to tissue damage, organ failure and death, according to the Sepsis Alliance. Sepsis Survivor Week, February 9 - 15, honors the experiences of the 1.4 million Americans who survive sepsis annually.

“When Acelin arrived at the ER, he was listless, limp, and struggling to breathe - his abdomen was distended and his heart rate was extremely fast,” recalls Michelle Hooks, RN, director of emergency services at Medical City Plano. “We began sepsis protocols, starting an IV for fluids and antibiotics. While we continued our assessments and treatments in the ER, we also began the process to transfer him to our sister hospital, Medical City Children's Hospital, for more specialized, pediatric care.“ 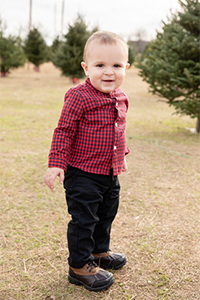 An X-ray revealed a tear in little Acelin's stomach. Any breast milk he consumed was leaking into his stomach cavity, leading to a sepsis infection. Acelin was quickly transferred to Medical City Children’s Hospital, where pediatric surgeon C. Thomas Black, MD, performed emergency surgery to identify and repair the baby’s gastrointestinal problems. After a successful surgery and almost three weeks recovering in the hospital, Acelin was able to return home with his family.

“The ER was really fast about getting Acelin into the room and hooked up to the IV, assessing his situation,“ Castro Baretto, Acelin’s mother, says. “There were many pieces of the puzzle that fit perfectly to make this a success story - the ER, the nurses, the surgeon and staff at both hospitals, and how Acelin responded.”

Early detection is the best hope to survive and limit disabilities when sepsis is present. If you suspect sepsis, call 9-1-1 or go to a hospital and tell your medical professional that you are concerned about sepsis. The signs and symptoms of sepsis include: