MCKINNEY – As a veteran Allen firefighter and paramedic, Jason Denton knew the signs of a stroke. He just never expected to experience those symptoms himself. He, along with his physicians, are bringing attention to the warning signs and lifesaving treatment for National Stroke Awareness Month.

In early March, after helping with a COVID-19 vaccine clinic in Allen, Denton put a call into his brother as he was leaving. During that conversation, his brother immediately noticed Denton didn’t sound normal. His brother called Denton’s wife, Jennifer, who encouraged him to turn around and seek help.

“From my truck, I got the attention of a co-worker who helped me get back into the vaccine clinic. It was obvious. I was having a stroke,” Denton says. “I had facial droop and I knew what I wanted to say, but I couldn’t get the words out.”

Allen firefighters at the COVID-19 clinic called an ambulance and brought Denton to Medical City McKinney, a Primary Stroke Center. Stroke symptoms can be identified by the acronym FAST: 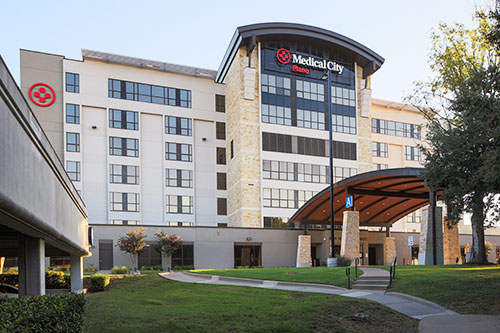 “When I arrived at the hospital, everyone on the stroke team was at the door. I went straight for the CT scan. After the CT, they immediately administered tPA,” Denton says.

TPA is a clot-busting medication that can be a first-line and lifesaving treatment for stroke. It works to break down the clot that caused the stroke and restore blood flow to the brain.

“TPA is very time-sensitive. We need to administer the medication within 3 to 4 and a half hours of the onset of symptoms,” says Mike O’Neal, MD, Medical City McKinney emergency medicine physician. “With Mr. Denton, we were able to administer tPA within 15 minutes of arrival, which increases his chances of fully recovering any lost function.”

The “Code Stroke” team at Medical City McKinney administered the lifesaving tPA to Denton, and shortly after receiving the medication, he was transferred to Medical City Plano for surgical treatment of the stroke.

“Jason had a stroke affecting his speech and right arm. Stroke is a life-threatening event and in Jason’s case it was caused by a clot blocking one of the major arteries supplying blood to the dominant brain hemisphere,” says Jazba Soomro, MD, interventional neurologist at Texas Stroke Institute at Medical City Plano.

“With the help of advanced technology, we were able to perform a procedure to remove the clot from Jason’s brain artery quickly and restore blood circulation and maximize his chances for better recovery,” says Dr. Soomro.

Two months after his strokes, Denton is working on his recovery with outpatient therapy and hoping his story may help save other lives.

“Every day, I can feel myself get stronger,” Denton says. “I look forward to going back to my job and enjoying time with my wife and my kids. I have a lot of life ahead of me.”