He came to North Texas from HCA’s Plantation General Hospital in Plantation, Fla., where he had served as COO since 2013. While there, he helped develop plans for a new, $256 million hospital, and oversaw a 12-bed expansion of Plantation’s Emergency Department.

Patrick also made a significant contribution to the growth of Plantation's robotic surgery program, developed Ebola and Zika emergency-response teams and protocols, and established an intensive outpatient program in behavioral health for Broward County.

Earlier in his career, Patrick worked at several other HCA hospitals in South Florida, including Kendall Regional Medical in Miami, JFK Medical Center in Atlantis, and Columbia Hospital in West Palm Beach. 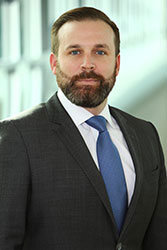 Prior to joining the leadership team at Medical City McKinney, he was the Assistant chief financial officer and chief staffing officer for Chippenham & Johnston-Wills Hospitals, an HCA facility in Richmond, Virginia. As ACFO, Stein played a critical role in supporting the two-campus, 758-bed hospital system through expense management and service line growth and securing capital funds for two large emergency room projects.

He has also served as director of hospital financial operations for St. Vincent's Health System in Birmingham, Alabama. Stein began his career at Ernest & Young in their assurance & advisory business services after completing his training.

Prior to healthcare administration, Dr. Babber was an emergency room physician at the VA Medical Center in Houston and at MD Anderson Cancer Center, where he received the top quality improvement award.

Holmstrom has more than 12 years of healthcare experience. She served as the assistant chief nursing officer at Methodist Hospital Metropolitan, part of the HCA San Antonio Division, since November 2018. During her tenure, she was responsible for providing leadership direction for women’s services, the cardiovascular telemetry unit, oncology, surgical services and several supporting service lines. She was the lead administrator for the expansion of the facility’s cath lab services, which resulted in a significant increase in lifesaving heart procedures.

Holmstrom joined HCA Healthcare in 2013, where she served as manager of the medical-surgical orthopedic unit at Medical City Lewisville. She has held numerous nursing leadership positions at large regional hospitals throughout Texas, including vice president of clinical nursing for Methodist Hospital Metropolitan in 2016.

Holmstrom holds several degrees, including a Doctor of Nursing Practice and a Master of Science in Nursing, both from Walden University. She is also a graduate of HCA Healthcare’s prestigious Executive Development Program.