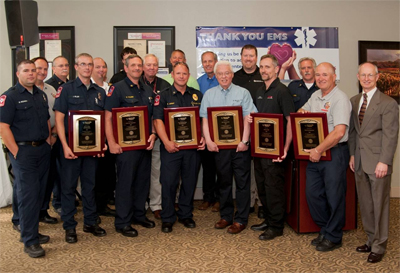 Keller Fire Department recently was given an award by Medical City North Hills for their partnership with the hospital that led to a national award.

Keller firefighters are trained to provide lifesaving cardiac care by activating the cardiac catheterization process in the field, which allows patients to be taken straight to the cardiologist and treatment to begin as much as 60 minutes faster than the national average.

During a June 19 City Council meeting, Moresi presented Battalion Chief Steve Palmer with a plaque to thank Keller Fire Department for their contribution to the community and to the hospital.

"I cannot tell you the number of people’s lives we have seen saved over the last 10 years, that wouldn't have had a chance 10 years ago if it wasn't for these guys," Moresi said, referring to firefighters packing the council chamber.

Moresi said the Chest Pain Cycle 4 with Percutaneous Coronary Intervention (PCI) is the highest level of accreditation in the nation.

"I'm sure there will be other hospitals that will achieve it in time," he said. "But it is not the Mayo Clinic, it's not John Hopkins, it's North Hills Hospital in our community...If it wasn't for these guys we would have never gotten this national award."

Palmer said the getting quick treatment for a cardio patient is a team effort.

"There are places around the country now that can't believe what we’re doing here in Keller and what we’re doing in northeast Tarrant County with our sister cities," Palmer said. "It's truly a team effort. We've accomplished something very unique."